Although international travel is still restricted, we are hoping to welcome volunteers back to our Wildlife Centre in the coming months! Earlier this year, we sat down with one of our former volunteers, Ella, to find out more about her experience.

Hi, I’m Ella Gray, I’m 21, and I’ve come over from England. I signed up as a sanctuary volunteer for four months with Lilongwe Wildlife Trust (LWT). In my time I’ve seen and done so much! I’ve taken part in a lot of enrichment and lots of feeding of different animals.

So much wildlife has come into the centre while I’ve been here. That’s why it's good to be here for so long. I've seen so many things. It’s been really cool. 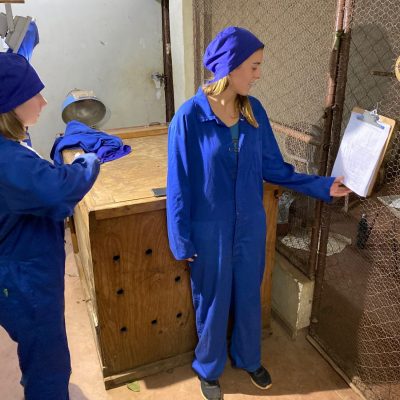 Longer stays also mean you can go to Kuti Wildlife Reserve and other places. It’s a nice change of scenery – sitting by a campfire or riding in the back of cars, watching zebra and sable walk past you.

As for the sanctuary work it’s been really great! I spent most of the last two years working in Limpopo in South Africa with vervets so I was already experienced with orphaned baby monkeys. I think that’s often people’s highlight. For me, I’ve enjoyed all the other animals. There is so much variety that comes in here and needs care. I’ve been learning about and feeding a blind chameleon and also this grey parrot. She’s still quite nervous so we don’t do a lot with her but it’s been interesting to learn what issues can arise when people keep illegal pets. The parrot for instance doesn’t really birdcall the way you’d expect. She imitates other animals and makes fire engine noises – the things she heard most often in the house she was kept in.

For me, the best moments as a sanctuary volunteer have definitely been the three pangolins that have come in since I’ve been here. The Wildlife Centre has only had four or so in the last year so to see three has been really lucky. I’d never seen one before. It’s very cool to look at them and take them for walks to find their food. They’re so gentle. It’s amazing that they have all survived because it’s really tough to keep them alive in captivity – they don’t do well. And the last of the three that came was tiny. She was only two months old. So we weren’t sure if she was going to live while in our care but she has. That‘s been really exciting! The next stages will be challenging for her, but so far so good. It’s so horrible that people want to hurt them.

I was supposed to go to university and study wildlife conservation. But after my gap year – I went to South Africa – I decided not to go to back. It wasn’t for me. Much to my parents’ disappointment, I cancelled my place and did an internship. My goal is to get the most out of internship experiences like this one and then secure a job working with animals.

So far I’ve learnt so much I wouldn’t have just with the theory side of things. How to handle them, watching how they cope with different situations. It’s so important to experence it first hand.

For me, I love the animal care side – the feeds and the nurturing stuff. I don’t have any desire to be a vet nurse or anything. But the fact you can shadow vets and watch procedures and witness necropsies to understand how animals die, it’s really educational.

Aside from the animals, the volunteer side of being at the sanctuary is great too. Again staying for so long there have been times where it’s been me and one or two other people. So there’s lots of down time to read, do trail walks and things because the others are often busy at different times to you. And then there’s been times when there have been 10 of us and we all go to dinner and out dancing. It’s so unique that a sanctuary is in the middle of a city. Where I was before, I was isolated for 10 months. Here you can go to bars and see live music. But at the same time, once you’re in the Wildlife Centre, it’s so big and feels like you’re a world away from the city. It doesn’t feel like there’s a million people outside of it.

I’m heading home soon but I’ll be back to Africa as soon as I can. I’d definitely recommend others getting out here and seeing and learning all there is to offer.

Sanctuary volunteers placements, vet externships and wildlife vet courses are all open to book from 2021 onwards. If you’re interested, learn more on our volunteer pages or send us an enquiry at placements@lilongwewildlife.org.