Published in The Nation newspaper on 2nd March 2016 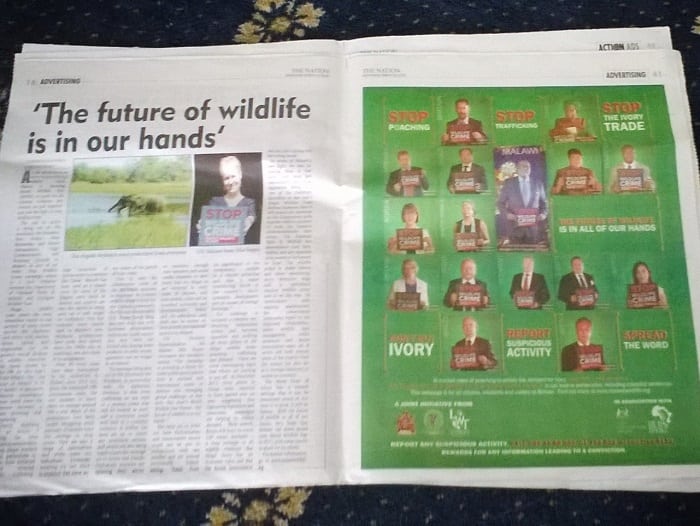 As the world faces an ever intensifying wildlife crisis, Malawi is choosing World Wildlife Day to push for all citizens, residents and visitors to pull together and join the fight to stop wildlife crime.

The call to action is being led by His Excellency the President Peter Arthur Peter Mutharika and fourteen Ambassadors, High Commissioners and Honorary Consuls to Malawi, as part of the wider Stop Wildlife Crime campaign which is a joint initiative between the Department of National Parks & Wildlife and Lilongwe Wildlife Trust.

Illegal wildlife trade poses the most immediate threat to the survival of many iconic species like elephants and rhino with human-driven habitat loss responsible for the greatest overall declines in wildlife. Therefore the theme chosen by the UN for this year’s World Wildlife Day – ‘the future of wildlife is in our hands’- is pertinent. Collective conservation actions could mean the difference between a species surviving and disappearing.

Certainly, elephants could go extinct if poaching for ivory continues at current rates.  Booming illegal markets overseas, particularly in the East, have attracted organised criminal syndicates who are trafficking large quantities of African ivory to countries like China.  Malawi has been used as a transit route for some of the biggest ivory hauls in history and experts say that the nation is being seen as a soft target for traffickers. This has included ivory traced back to Malawi’s own elephants (populations have more than halved since the 1980’s thanks to poachers) and also those of its neighbours.

Over 90 ivory cases have been intercepted by the authorities in Malawi since 2010 but, given the estimated 10% interception rates, the real number is more likely to average around 190 a year. Many of the perpetrators have been caught smuggling small amounts of worked ivory like carvings or chop sticks. They are also a range of nationalities and whilst many are individuals knowingly breaking the law there is evidence that some are not aware of the gravity of their crime.

This is why the collaborative work of the diplomatic missions is important. At a recent wildlife event hosted for the Chinese community, the Chinese Ambassador, H.E. Zhang Qing Yang was very clear that with increased sensitisation, individuals could ensure that they were not tricked into buying ivory products. In other words, ignorance can no longer be an excuse.

The message being sent out by His Excellency, the President, in partnership with the diplomatic missions, is that ivory trafficking on any level is a serious crime that will be treated as such, and a conviction could well lead to a custodial sentence. A hotline has been set up to report any suspicious activity, and people are also being urged to pass the message on to family and friends. Missions are updating their advice to travellers through their websites and social media channels, and next month a film will be launched online and on television, and shall also be shown on loop at both international airports.

UN Resident Representative for Malawi, Mia Seppo, welcomed the initiative, saying, “The campaign is providing a forum for wider public participation both at national and international levels to address this emerging global challenge, in line with this year’s World Wildlife Day Theme, ‘the future of wildlife is in our hands’.”

She went on to point out how humanitarian and conservation issues could not be put in competition with one another and are instead intrinsically linked, saying, “Aside from its significance to the ecosystems, wildlife is a tourist attraction and thus a major cont­ributing factor to the country’s socio-economic development and an earner of foreign exchange.”

The challenge is certainly a complex one, requiring cooperation within and between countries and tackling all three pillars of the illegal wildlife trade: poaching, trafficking and demand.  There are some encouraging signs that efforts are starting to pay off.  In December 2015, ivory prices in China were reported to have halved year on year, suggesting that tightening legislation and awareness campaigns are helping to reduce demand.  Next month, Kenya will burn its entire 120 tonne stockpile – a clear message to all wildlife criminals that illegal ivory has no economic value and that the Kenya Government will not risk it falling into the wrong hands.

In terms of Malawi’s own fight, we may be starting from a low point, with poor law enforcement and weak legislation being just two of the challenges identified in last year’s Illegal Wildlife Trade Review.  However there is still reason for optimism as the Government pulls together with its partners to push the review’s recommendations into action. The National Parks & Wildlife Act amendments have been drafted and are expected to be passed in Parliament in June. The wildlife policy is under review and court monitoring, ivory detection dogs and a specialised reactive wildlife crime unit is on the way.  In combination with ongoing sensitisation, the conservation community hope to see improved collaboration, better wildlife data management, stiffer sentences and better interception rates, all of which will both remove some of the culprits from the system but also act as a stronger deterrent to would-be criminals.

The Warm Heart of Africa has a natural heritage that it can be immensely proud of, but once it is gone, it will be forever.  With the future of wildlife in all of our hands, let’s hope that Malawi can stand proud next World Wildlife Day in 2017, with some results to show for its efforts.